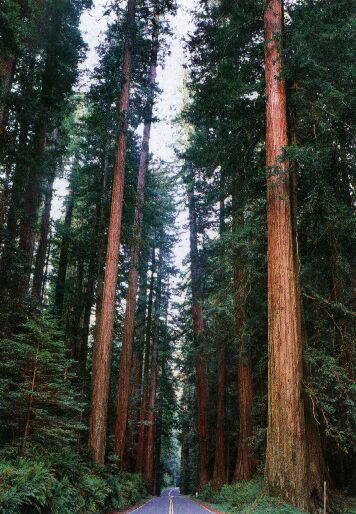 The Druids: figures of romance and mystery. Mention of them evokes images of cloaked figures performing obscure rites in the oaken groves of Gaul. The name Druid, at least according to some sources, means “oak Priest” and the magnificent Oak was indeed the chief of the trees revered by the ancient Celtic Priests. In ancient Gaul, the Oak was indeed the most impressive of trees. Known for the strength of its boughs, and its sheer beauty it was also the source of the sacred mistletoe.

So what if the Druids had lived in California? Specifically, the northern coast? I believe that our own Coast Redwood (Sequoia Sempervirons) would have become the tree revered most by the Celtic priesthood. The poor oak pales in comparison to these magnificent trees, which grow to an average height of 311 feet. The redwood is also the source of the mysterious burl, which give many of these trees distinctive personalities. From a distance, the formation of burls can make faces appear on the trees, evoking thoughts of the Ents, Tolkeins race of trees.

Redwoods grow in two ways. The first is with seed, and their seeds are among the smallest of any plant known, hundreds of which can be found in the redwoods own pine cones, which average around the size of a large jelly bean. The second way they grow is by shooting new trees from their root systems, which spread out hundreds of feet around the typical redwood, just a few feet deep in the ground. Typically, these offshoots form “fairy rings” around their mother. As they grow, and the mother tree dies off, the ring is all that is left. I can picture the Druids using these natural rings as the centers for their rites. The Redwood is illustrative of magickal practice too. Its root system, which extends from the center of the tree grounds it, like the familiar grounding meditation many of us do before Circle, to connect ourselves with the earth mother. The tree then shoots high into the sky, higher than any other tree, also like the familiar centering meditation which affirms our connection to the cosmos. 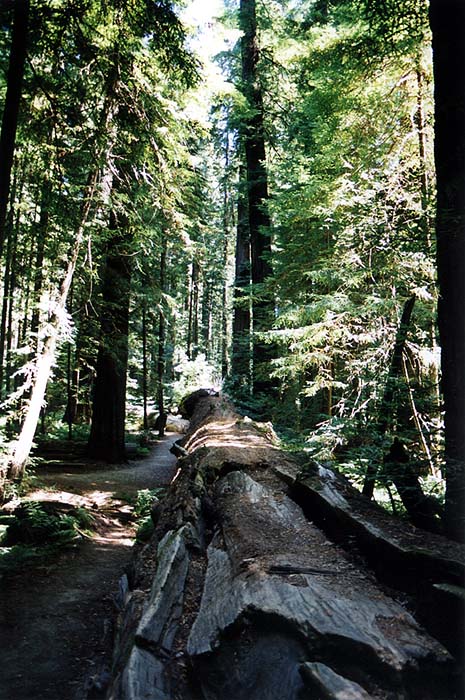 Water brethren may find the Redwood a friend too, since it gives off ten times it’s own weight in moisture every day. The Redwood also needs a lot of water, which is why it thrives only from the Big Sur area to a few miles into Oregon, and only within a thirty mile stretch from the coast. They like all the rain and fog we get here. They are true water-kin. Water was sacred to the Druid as well. Most of their main groves had a spring or stream running near or through them, and water deities played an important role in much of Celtic mythology.

My own staff came from a Redwood, a rather famous one. The Dyerville Giant was once listed in the Guiness Book of World Records as the worlds tallest tree. When it stood, it rose some 375 feet into the air. Alas, in 1991 it toppled. Residents in nearby Weott thought an earthquake had hit, and the sound of the impact was heard thirty miles away. I visited the fallen giant, located in “Founder’s Grove,” off the famous “Avenue of The Giants” in 1994. It was in the early morning, and I was guided to the top of the tree. There on the ground, like it was placed there, was my staff, broken from the top branches of the giant. . I remember feeling quite enchanted during our visit, and, although at the time we were the only humans around, I felt the eyes of other entities watching us. I know there were fairies in that grove, and my walks in other Redwood groves have confirmed for me the presence of fairy folk.

We who are modern Druids living here on the north coast are very blessed indeed. Surrounding us and within easy driving distance is Redwood National Park, home of some of the most impressive and ancient redwood groves in California. Any time one needs to recharge one’s spiritual batteries, an hour or so spent in the giant trees will do the trick. And, if you stay very quiet, and still, and long enough, one of them just might speak to you.

This article was published in the September 2004 issue “The Isis Scrolls,” a local(Humboldt County, CA) and FREE resource for the new age and healing community on the Redwood Coast. For more information email isis_scrolls@earthlink.net