Q: WHAT ARE COAST REDWOODS?

A: Coast Redwoods are the tallest tree species and among the largest living organisms ever to inhabit the Earth. Redwoods are named for the beautiful red color of their bark and heartwood. The wood has a high level of tannic acid, which is toxic to most insect pests.

Q: WHERE ARE COAST REDWOODS FOUND?

A: Coast Redwood forests are found only along the Pacific Ocean from central California to southern Oregon in a narrow zone about 20 miles wide and 450 miles long. More than tall trees, a Redwood forest is a complex ecosystem made up of an astounding variety of living and once living things. Today they are an endangered species.

Q: HOW TALL DO COAST REDWOODS GET?

A: Mature coast redwood trees average 200 feet tall, but often they reach more than 300 feet in height. More than a dozen trees over 360 feet tall live along the coast of California.

Q: HOW OLD ARE THEY?

A: Individual coast redwood trees can live for hundreds of years. In some areas of their range, they can live more than two thousand years. The oldest recorded coast redwood is 2,200 years old.

Q: HOW DO REDWOODS REPRODUCE?

A: Redwoods are conifers, which means they have cones and needle-like leaves. A redwood cone is about one inch long and contains 14 to 24 tiny seeds about the size of a tomato seed. A single tree may produce millions of seeds in a year. Only a small percentage of the seeds actually germinate and grow into seedlings. Although redwoods can grow from seeds, they more commonly reproduce from sprouts. New trees can sprout from the roots of parent trees, from buds at the base of a tree, or from a fallen tree. If a tree is cut or burned, a circle of trees may sprout from the stump, forming a “fairy ring” of new trees.

Q: WHERE HAVE REDWOOD FOSSILS BEEN FOUND?

A: Redwood trees are true “living fossils,” having existed largely unchanged for millions of years. Redwood fossils as old as 160 million years have been found throughout the western United States and Canada and along the coasts of Europe and Asia. Close ancestors of the coast redwood have been living since dinosaurs first appeared. Coast redwoods prefer mild year-round temperatures with winter rain and heavy fog, a climate that was more common in earlier ages. The last ice age limited coast redwoods to their present range.

Q: ARE THERE OTHER KINDS OF REDWOODS?

A: There are three different redwood species: “The coast redwood” (Sequoia sempervirens) is the world’s tallest tree species. It grows in forests only along the west coast of California and southern Oregon. It is evergreen. “The giant sequoia” (Sequoiadendron giganteum) is shorter – up to 300 feet – but larger in diameter than the coast redwood. It is the world’s largest (most massive in total weight) tree species. It grows only at 4,000 to 8,000-foot elevations in California’s Sierra Nevada. It is also evergreen. “The dawn redwood” (Metasequoia glyptostroboides) is much shorter than the other two redwoods, up to 100 feet tall. Scientists thought that this species was extinct until it was discovered growing in a remote area of China. It is deciduous (not evergreen) in winter. 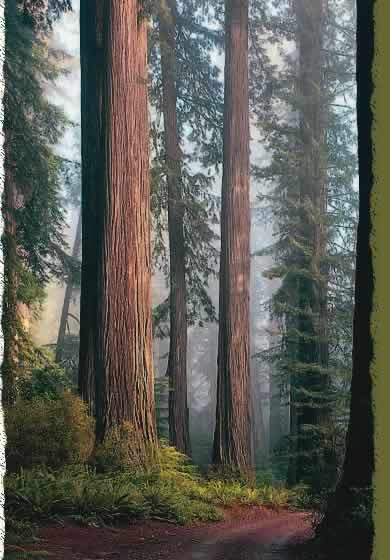