In Stranger In A Strange Land, Michael introduces us to the rite of Water Sharing. On the planet of his birth, Mars, water is a scarce and precious commodity, and sharing water is done only with one’s most intimate friends or family, or with those whom one would wish to grow closer to, in order to include a new friend in your company of family. On Mars sharing water is literally, sharing life itself. Michael even calls it the “water of life.”

Water has played an important part in religion on earth from time immortal. The only things we know for sure about the ancient Celtic religion is that it was dependent upon water. Sacrifices were placed in lakes, ponds, or streams, to appease the Gods. These sacrifices were usually in the form of valuable artifacts: jewel encrusted swords, knives, shields, helmets and other weapons. Intricately decorated cauldrons, pots, pans, jewelry, many of which were created solely to tossed into the water. The great shrine at Bath, England was created by the Romans over another more ancient Celtic shrine honoring the Goddess of Water. Druid groves were always near springs or streams. The central initiation of Christianity is baptism, where water is used to cleanse one from sin, but it also serves as a symbol of birth, for just as a new human emerges from the water of the womb to take his first breath of life, so the new Christian emerges from the water of baptism to do the same.

The Order of the Mithril Star borrows Michael’s rite of water sharing and combines it with the Reformed Druid rite of the waters of life. For us, water sharing is the first initiation into the Order and this would be a “first level” water sharing.

Another level of commitment occurs when the Druid joins a Grove. Here hirm is pledging to a smaller group of people, known to hirm personally. The Grove is a family, or clan. This would then be a “second level” water sharing.

The final level of water sharing takes place when the Druid enters a polyfideletous relationship with two or more of hirms water siblings, and enters the Nest. This is the “third level” water sharing, wherein the Druid becomes married to a group of people. This is the highest level of commitment, involving sexual intimacy, economic melding, and a communal intermingling of ones worldly and spiritual goods. 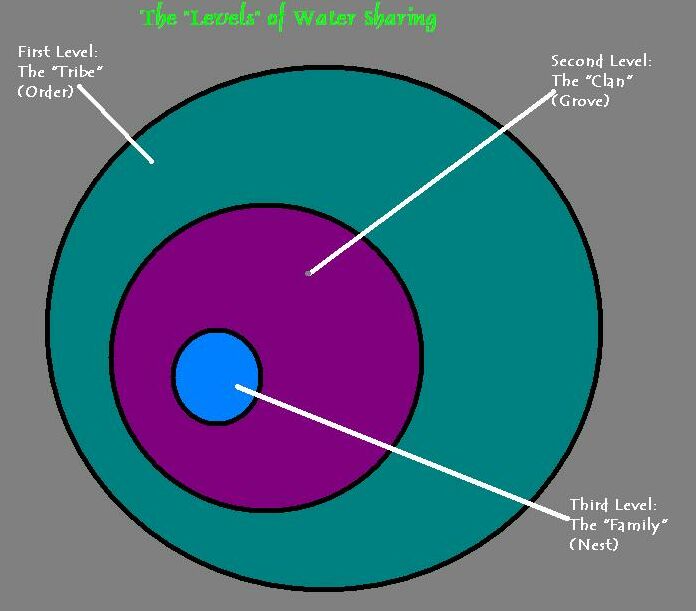