And it came to pass that Dalon ap Landu and Sequoia became not just friends but lovers as well. Such was the lust they had for each other that it is said they ran through the entire Kama Sutra in a day, and that their lovemaking was heard in the trees named for the Dryad for days on end, prompting Fae and Human alike to hide their children in caves (some of whom experienced great adventures – but that’s another story for another time).
Gods, it would seem, need not come up for air, nor food, nor rest.

But all good things do come to an end. Dalons condom broke.

Then Sequoia said, “My breasts seem bigger, and they’re kind of sore too.”
Dalon exclaimed, “Your breasts aren’t the only thing — you’re getting fat – but how can this be? Neither of us has eaten for months! Look at me! I’m practically skin and bones!”

And indeed, Sequoia seemed to be getting bigger even as they spoke.

It was a few days prior to the great feast of Lugh, in the year we now call BGR 01, that Sequoia and Dalon discovered their condition. The child grew daily, much faster than human or beast or Fae. Only in Science Fiction have you seen such speedy gestation.

Now, Dalon and Sequoia were in attendance at this gathering, yea, even at the very ritual we speak of, and lo, she was great with child. At the same moment, the very moment, that the Server was getting ready to pour the waters of life into the chalice, it was at this moment, that Sequoia’ s water broke. Some say, and it may be true, that she grabbed for a vessel to catch her waters and came upon the chalice on the Druids altar, and so it was Sequoias birthing waters that the Archdruid consecrated, and that the Druids partook of that night. All this may very well be, for the Server noticed that the chalice was already full, and so presented it to the Archdruid not giving this another thought.

Within the hour the time came. The Goddess gave birth to a Goddess. Her skin was light green, like the spring foilage, and she had a purpleish hue round about her. Most striking, she came forth from the womb with a full head of shocking red hair, and as is usual with newborns, she was very sticky.

Her very presence affected everyone around her in the most peculiar way. People were suddenly happier, giddier, very relaxed, even mello and, in about an hour, hungry, some crying out. “Where’s the feast!”

Dalon was ecstatic, he had never fancied himself a father, yet here amongst the Druids, was his new born daughter. And Sequoia said, “See how green she is! And the red hair!” ! Let us name her Cywarch.”

And so it was that during the festival of Mabon, at the Autumnal Equinox, after the Solar Eclipse, and the new year of the Hebrews 5767, and before that of the old Reform 45, there was born a Goddess, the daughter of Sequoia and Dalon ap Landu. She was called Cywarch merch Dalon, and her parents rejoiced with the Druids.

And Dalon said, “Today is the birthday of my child, and the birth of a new epoch of Druidism. I proclaim therefore that Reformed Druidism shall now spread throughout the Earth, and it shall be spread upon my daughters wings, as she shall be the patron of the Gaian Druids, and she shall guide and nurture the Gaian Reform. And the Druids shall gather each year at this time, in forests and Groves across great Gaia, and celebrate this, the feast of Cywarch.”

And so was born unto the Earth, the Reformed Druids of Gaia. 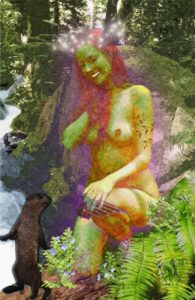